Dr. Nikhil Varghese is an Associate Professor in the Area of Economics, Business Law and Strategy at IILM’s Gurgaon Campus. Dr. Varghese has completed his Doctorate in Management from Pacific University and holds a MBA degree is first class from the University of Rajasthan, Jaipur. He graduated from University College of Social Sciences & Humanities of the Mohan Lal Sukhadia University, Udaipur. He also holds a Diploma in Export Management from the National Institute of Export Management, Chennai. Dr. Varghese has a diverse experience of eleven years in Academics, Research and the corporate sector. Prior to joining IILM, Dr. Varghese was associated with the Associated Chambers of Commerce & Industry (ASSOCHAM) as a Joint Director. He has also worked with Centre for Monitoring Indian Economy (CMIE) as an Information Officer. During his stint with CMIE, he has closely worked with various Ministries, Govt. institutions and PSUs. He has also served as a Dy. Director with Pioneer Institute of Management, Udaipur and as an Associate Professor with Poornima University, Jaipur. He has authored several research papers in the areas of Energy, Healthcare and Economic Policy. He is currently authoring a book on Energy Sector in India. Dr. Varghese is passionate about education and has been regularly visiting various schools and colleges for delivering special lectures to students. 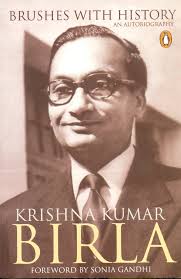 Dr. Krishna Kumar Birla was a noted industrialist of the Birla family. Born in Pilani in Rajasthan on November, 11, 1918, he was the eldest of the three sons of Maha Devi and Ghanshyam Das Birla. He started his business career in the year 1940 and played an important role in shaping and developing India’s sugar industry. He diversified his business interests by venturing into textiles, engineering, shipping and fertilizers. He was a Member of the Rajya Sabha for three terms from 1984 till 2002 and served on several committees of Parliament. He was the chancellor of BITS Pilani from 1983 until his death in 2008. He was the chairman of one of India’s biggest national daily – The Hindustan Times. Birla was the group chairman of the Zuari-Chambal group of companies with a turnover of over Rs.10,000 Crores. He was also the Chairman of Zuari-Chambal-Paradeep, India’s largest fertilizer combine in private sector.

The book is divided into four parts and 40 chapters. Part 1 entitled “My Early Years” consists of twelve chapters and talks about the family roots of Birla family and the family village of Pilani in Rajasthan. The part 1 introduces the readers to the childhood, bringing up and early life of Dr. K. K. Birla. The canny Marwari clan that originated from a small town called Pilani in Rajasthan became the tallest industrial house in this country in the 20th century rivaled just by the Tatas in post-Independence India. The family patriarch and author’s father, G.D. Birla used his wealth to support the Independence movement and became not just a friend to, but a follower of, Mahatma Gandhi. The Birla residence had become a hub and meeting point for those fighting for freedom and especially the Congress Party. Part 1 of the book also talk about how hard working K. K. Birla was as a student and about his early business ventures with his father and Uncle.

Part 2 – “Indira Gandhi: Reminiscences” the part 2 of the book talks about the family ties between the Nehru Gandhi family and the Birlas. This part stresses on the dynamics of the family ties and how it evolved with generations. Unlike his father’s frosty relationship with Nehru, K K Birla was close to Indira Gandhi, Nehru’s daughter. K. K. Birla was also close to Sanjay Gandhi, Indira Gandhi’s younger son who died in a plane crash in 1980. The book talks about Sanjay Gandhi approaching Dr. Birla to become a shareholder in the company and infuse some capital. But K. K. Birla was not convinced with the Maruti small car project initiated by Sanjay Gandhi. He though that for Sanjay Gandhi to realize his dream, it would have to be a large-scale project requiring large investments. He even told Indira Gandhi that her son was leading an unwise project and needed to be restrained.

Part 3 – “My later Life” focuses on the end of political innings of K. K. Birla as a three term Member of the Rajya Sabha. This part also talks about the family’s academic institutions and those set up by Dr. Birla himself. His numerous responsibilities included the Trusteeship of the Birla Education Trust, which runs a number of schools and institutions in the Country offering subsidized education, and Chairmanship of the prestigious Birla Institute of Technology and Science (BITS) at Pilani and Dubai. Dr. Birla had established K.K. Birla Foundation which has instituted annual awards for excellence in Indian literature, scientific research, Indian philosophy etc. and K.K. Birla Academy to undertake research on scientific, cultural and historical subjects. This part also talks about his health related issues and his heart bypass surgery that he underwent in London.

Part 4 – “Vignettes & Correspondence” is a collection of the written correspondence that Dr. Birla had with various people including political and business leaders, the top executives in his company and some of his family members and cousins. Dr. K. K. Birla had a rare distinction of being a multi-faceted personality but above all he was a humble humanist. The beautiful Radhakrishna Temple dedicated to Lord Krishna in Kolkata and the G.D. Birla Sabhagar in Kolkata are the two popular monuments which are amongst his many social contributions bearing testimony to his regard for humanity.

I think the book makes for an interesting read as it is full of vignettes of Birla family’s close ties with historical personalities like Mahatma Gandhi, Rajendra Prasad, B.C Roy, Jayaprakash Narayan & Moraji Desai, among others. This autobiography captures a vibrant era in the nation’s existence, which influenced Dr. Birla’s thoughts & later achievements. The book brings in the readers, a deep sense of respect for him, as it is replete with a towering humility and sense of discipline which Dr. Birla was well known for. This book is rich with impressions, sketches and personalities and there is not a single boastful or smug moment in the whole book spanning around 650 pages. Through this autobiography one vicariously brushes shoulders with India’s greatest leaders. Prestige, power, family, courage, discipline, loyalty – this is what drove K.K. Birla in a life spanning nine decades.