A company visit for a group of undergraduate students was organised to the studios of NDTV. The students were very excited because it was the first time any of them had ever visited a live studio. NDTV’s offices are located in Archana Shopping Complex which houses almost all of NDTV’s verticals – NDTV 24×7, NDTV India, NDTV Prime and NDTV Convergence. 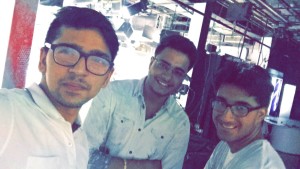 The visit started with an orientation of the Production Control Room. This is the room where all the elements of a bulletin are collated on screen and the final product is broadcast all over the world via satellites. The students watched the director, producers and the audio and vision mixers working together to put together the entire show. This was followed by a visit to the main studio where the students watched how the cameras captured the anchor live and how the small space was utilised to give the impression of a huge studio with multiple set ups.

They were then guided to another studio where they saw how the set for another show was put together. The lights, seats and podiums were all being customised to the needs of the particular show that was to be recorded later during the day. They also caught a glimpse of the Video Tape Library, a room full of tapes of old shows that had once been aired on NDTV. 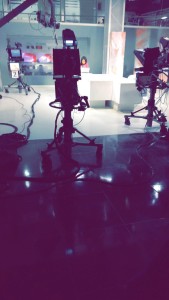 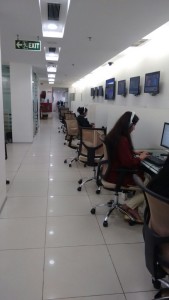 Lastly, the students were shown around the newsroom, where editors worked together to line up bulletins, and the edit bay where all the visuals were put together to air as required. They got answers to their queries regarding TRPs and how they influenced advertisements put forward by companies. Before leaving NDTV they also saw Outdoor Broadcast vans that are often used for shoots in and around NCR. 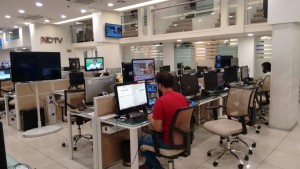 Overall the students had quite an exciting time. The only disappointment was the fact that they did not meet any celebrities on the premises to click photographs with.