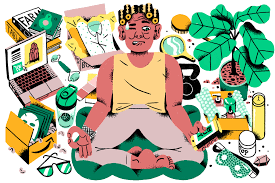 According to a Mckinsey report, the spirituality among the Indians is decreasing while consumerism is on a rise. For the very same reason, India is now known as one of the biggest market places in the world. The things which used to be luxury for our grandparents and parents have now become necessities for us. Also, our parents used to buy things for a lifetime but we buy things for just a few years or even for just months. This kind of shift in temperament is visible in various other studies also as when the whole world is now moving towards contentment we are still on the path of dissatisfaction. On the one hand, when the entire world is moving towards spirituality Indians are tilted towards consumerism.

The world has moved beyond mere economic development to the well-being of individuals. Presently, the growth of a nation is just not reflected in terms of GDP growth figures rather it is being measured in terms of happiness index. Since 2012, the United Nations have also come up with a study on the happiness of people across countries each year to recognize the happiness quotient of people and their well-being in place of economic development only. Since the beginning, India consistently ranked at the lower strata of countries in the world’s happiness ranking. The same story continues even in this year also as according to World Happiness Report 2020, the performance of India is very dismal in terms of ranking on Happiness Index as it ranked at 144 out of total 156 nations much below than the neighboring countries like  Pakistan, Nepal, Bangladesh, and Sri Lanka which are ranked at 66, 92, 107 and 130 respectively.

To be Spiritual Guru

In the World Happiness Report, the main factors considered for the Happiness Index of individuals are the social environment and the ability to make decisions of life.  At present when India is urging to be recognized as the ‘Spiritual Guru’ of the world it is the time when we need to dig out the learnings from our own old and probably forgotten literature to improve our ranking by increasing the well-being of Indians. India, a land of sages has a very rich source of wisdom in the form of religious and philosophical literature. India is a country that had philosophers who themselves have not gone through with any formal schooling and even they don’t know the art of writing but they have given us the mantra for content and satisfying life. Considering Kabir Das, a mystic poet, philosopher and saint of fifteenth-century who himself mentioned as illiterate as in his own words about himself ‘Masi kagad chhuyo nahi, kalam gahyo nahin hath’, he clearly said that he neither touched the paper nor hold the pen in his entire life but have given a wonderful message for a satisfying and happy life.

On consumerism, we can take a lesson from the work of Kabir as ‘Maya mari na man mara, mar mar gaye sharer, asha trushna na mari kah gaye das Kabeer’, the meaning of this verse is very apt that if we go for desires then will never be able to fulfill all instead we will lose ourselves by mere running behind them. Desires are like hallucination and they are never-ending, individuals can keep on fulfilling one the other will keep cropping up the very next moment which leaves us dissatisfied and discontent. So, the lesson which one needs to take that one should always look for needs not for desires because needs are limited which can be fulfilled and can be satisfied while desires are unlimited, and falling prey to your desires is like being in a vicious cycle which has no exit route.

Furthermore, Kabir also said, “Saain itna deejiye, jaame kutumb samaye. Main bhi bhookha na rahun, sadhu na bhookha jae”, with this he wants to convey that don’t be part of a rat race of earning higher and higher which will keep disturbing you and will not let you be satisfied. The desire for higher earnings will keep you in stress and dissatisfied so instead pray to the almighty for the earnings which are sufficient to meet your needs and to look after the needs of your dependents.

So, if we follow this one simple advice of Kabir to be content and don’t be a victim of our desires then one neither feel dissatisfied by comparing oneself with others nor one feels like losing control on ones’ own life. The aggregate of our feelings of contentment will surely reflect and will have a much-improved ranking on happiness index with the use of learnings of our rich cultural heritage in terms of literature.

Now the biggest question is ‘Which side you want to be?’  To be part of the rat race of consumerism or to follow the path of spirituality, guided by sages for ages. To get more on the subject can approach at kumar.saurabh@iilmgsm.ac.in.