In the recent years, an invincible startup movement has unfolded within our country. India has caught the eyes of the world as it is now home to second most tech startups after China and the ranking in number of total startups puts our country in top 5, globally.
IILM Graduate School of Management and Bizzino strategist presented “EMBRACE” the Marketing Conference on 27/2/2018. The conference aimed at providing students, access world class technology veterans, startup ecosystem, startup founders and their stories and more. 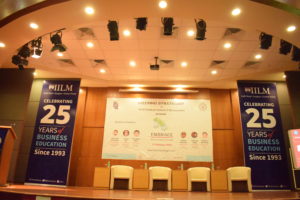 INAUGRAL SESSION
After a brief introduction to the conference, the inaugural session began with inspiring words from Dr. Sanchita Ghosh, Area chair Marketing, and Prof. Arun Gupta, Area chair Entrepreneurship.
The session started with the address from our key note speakers, Mr. Anupam Saronwala and Mr. Sameep Singhania. Mr. Saronwala is an expert of Internet of Things (IOT). He emphasized on the importance of exposure to new technologies for a start up to thrive and survive. He said that convincing investors to finance the venture is very critical and is becoming difficult with each passing day. However, he considered three areas, which if given substantial thought and actions taken accordingly, funding would not be a problem.  The first area was the team. While building the team, an entrepreneur should have people from multiple disciplines and everyone should have domain expertise. The next was that the target market size should be large enough to boil down to a good amount of target customers.  He then introduced the audience with the third and the most important point that an entrepreneur should be aware of the fact that his product/service can be easily replicated, if not patented. So there must be a differentiator in the product/service which minimizes the chances of duplication.
The enthusiastic pace set by Mr. Anupam was followed by that of Mr. Sameep Singhania, who through his insightful explanations proved his expertise in the area of block chain development and consultant. He helped the audience understand how block chain functions. He clarified that bitcoin is just one of many applications of block chain. He further added that this is going to be the future of technology, one that will become a necessity for every business.  As this is an area where youngsters are really interested in so the address was interactive and Mr. Singhania facilitated the understanding of all concepts that came up in the form of questions from the young minds or the future entrepreneurs who were attending the conference. 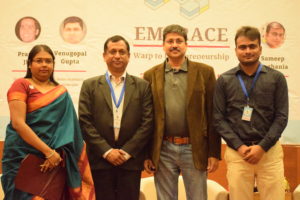 SESSION 2: PANEL DISCUSSION
The Inaugural session set the theme for the conference. The first speaker of the second session was Mr. Pranav Jha, who runs a startup community on facebook named “Startup Noida”. He emphasized on the power of digital groups, Facebook pages and communities. He added how influence marketing starts off as an activity and then it becomes a trend and that it is possibly the best way of creating awareness about the startup and captures the attention of angel investors.
This was followed by the interaction with Mr. Shashank Singhania, a digital marketing consultant. He threw light on the concept of native marketing and how its use is spreading across digital platforms. He further added that even though some digital products are free, it is difficult to get people to try them. He explained how becoming digital is important for a business as a digital technology can facilitate tracking any information. He then introduced a concept of smart marketing in which fake reviews of a product is added by the company itself to facilitate sales.
Then we had our last panelist for the conference, Mr. Harpreet Singh, who started his address by introducing the concept of startup ecosystem. Then he mentioned some of the common challenges almost every startup faces at the time of its initiation and first few months of survival. He said that it is difficult to find the right mentors and right manpower and dealing with customer non acceptance and family pressure is no easy task. He informed the audience of the A-Z list for the success of a startup where A stands for Attitude and Z stands for Zeal of the entrepreneur. He ended his address by quoting a very famous dialogue of movie 3 Idiots ‘Chase excellence, success will follow’.
This marked the end to the conference after a brisk question answer round between the panelists and the students.