IIM Calcutta recently concluded with its annual cultural fest “Carpe Diem”. It was a three day event starting from 27th of January to 29th of January 2017.  4 students from IILM got a chance to participate in the various events of fest.

In February 2016 Makeintern.com organized a two day workshop on ‘Digital Marketing’ on 18th and 19th in our college in Gurgaon. Around 30 students participated in this workshop mentored by “Mr. Ujjawal Chugh”. At the end of the workshop there was quiz conducted out of which 4 students were selected to participate in B-Plan competition to be held in the fest.

We 4 prepared a B-Plan on bespoke tailoring solution named as “Dressoup”. This was to be presented in the competition.

We landed in the noon in Kolkata and reached college wherein they gave us accomodations. Carpe Diem 2017 was inaugurated by famous children author Ruskin Bond. He addressed the audience and narrated about his various life experiences. We had a chance to interact with him and asked questions related to his books and stories. His speech was followed by a band performance ‘Laghori-Coke Studio’.

Our day started with breakfast in the student mess, eating which we missed our IILM breakfast very much. Then was the first round of B-Plan Competition in which a team quiz was conducted. It was written quiz which consisted of questions 125 on Rio Olympics, Constitution of India and general marketing concepts. Around 40 teams from various colleges in India participated in that quiz. After that we moved out and looked for other events. We were also given lunch coupons and again during lunch we realized IILM still stands far ahead in terms of food and hospitality. In the gaming corner a block game known as ‘Zenga’ was being played. Then there was picture puzzle, face painting doodle art etc. we participated in a few of them. The day ended with a performance by “Nucleya” a renowned DJ.

Results were announced for the quiz and much to our delight we qualified for the second round. Now came the time for presenting our business idea. Each team was given 10 min to put forward their presentation and after that there was a small round of Q&A from the judges. We presented our B-plan but exceeded the time limit by 2 minutes. However, judges were still convinced in the Q&A session. After that we saw many events like fashion show, dance competition etc. at 4 o clock results were announced and unfortunately we could not make it to top 3. Still, we would say it was an amazing experience for all 4 of us as we got a chance to be here in such a premier B-School and talk to people out there.

In the evening we left the campus and decided to take a small city tour. We visited Howrah Bridge, Birla Mandir and then Park Street, which is famous for its night life. Street food in Kolkata is very delicious and a must try.

Next morning we went to New Market and spent whole day wandering around as our flight was delayed by 3 hours. To sum it up, it was a very hands-on experience for those who always wondered what life in the most sought after B-School would be. 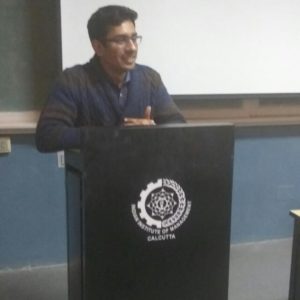 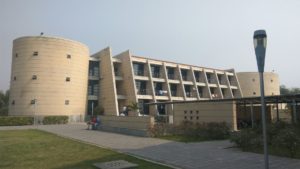