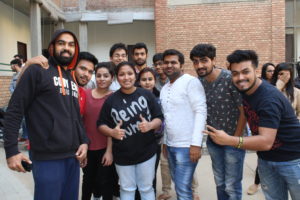 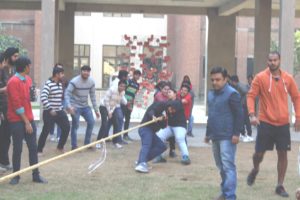 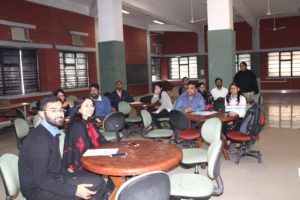 been six months and we have taken part in many activities be it HR, Marketing or finance activities. But this time we came out with an idea to merge two clubs i.e finance & sports into one mega activity.

In this way the idea of MASTER’S SUPER LEAGUE –“TUG-O-WAR” came into picture through brain storming among first year PG students. We came consensus that we will have an auction before the game. The real motive to bring auction into the picture was to make the students analysis and implement different tactics and put them in a real time situation like IPL or ISL’s auctions.

On 21st DEC 2016, we scheduled the auctions ceremony, there were four franchises comprising of two teachers and one student for their help. The auction lasted for one hour and the energy level was quite high from the franchises. The focus was to make a team of four boys and three girls as this was the mandatory criteria. But for the backup purpose spare players were added into the squad. Money was the constraints as virtual money of INR 50 million  were awarded to each franchise. So, it was very much difficult task that “where to invest and how to invest”. On the block there were 30 boys and 20 girls to be taken into teams. Base price for each female player was kept at 2 million and for each male player at 1 million after the end of many rounds of fierce bidding and counter bidding & auction every franchise was satisfied with their team they have bought.

On 22nd DEC 2016, the day came when these franchises were competing against each other. There were semi-finals and finals as there were only four teams. Looking at the teams’ one could easily estimate that the game was going to be very impressive as well as aggressive. And yes we can’t forget the roaring voices and thundering claps of the crowd’s cheering for their favorite teams. After six block buster rounds (including tie breaker) and many bruises in the hands of players, we had a winner in front of our eyes.

Many of us will think that tug-o-war is only based on strength but by combining auctions and providing money constraints we were able to introduce mind games.