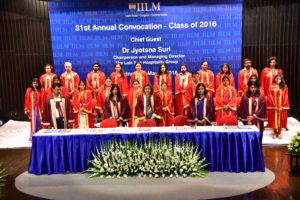 Dr. Smitha Girija – Director, IILM then welcomed the chief guest- Dr. Jyotsna Suri – Chairperson & Managing Director of Bharat Hotels that runs the luxury hotels chain “THE LALIT” under the Lalit Suri Hospitality Group. In the past few years the Group has been recognized with number of awards for its distinguished performance like the National Tourism Awards and National Awards for Excellence in Hospitality Education. Dr. Jyotsna Suri was President FICCI in the year 2015-16.  She has been listed amongst the Top 50 Business Power Women in Asia by Forbes Asia and amongst the top 20 Most Powerful Woman in Indian Business by Business Today. She is the only Indian member on the International Executive Committee of the World Travel and Tourism Council (WTTC).

Dr. Smitha Girija, then presented the Annual Report to the audience in which she highlighted the various achievements of IILM in the last one year. She proudly announced that in the EdUniversal rankings of best business schools in India, IILM has been ranked 11 (3 Palmes of Excellence category) for 2015. She also mentioned that IILM offers a wide range of Executive Education Programmes on various platforms and has organized Training programmes for IAS and IPS officers for over 10 years. IILM has also been conducting customized Training programme for leading PSUs like NTPC, NBCC, BHEL, and EIL. IILM also offer specialized programmes for Defence Ministry’s Directorate General of Resettlement for defence officers.

She further mentioned that IILM has recently partnered with Indian Institute of Corporate Affairs to jointly conduct programmes for Government officers and executives of PSUs and corporates. And IILM has also signed an MoU with National Skill Development Corporation. Also, the IILM Startup Labs has been incorporated to support and bolster a start-up company’s creation and activity in the early stages before it becomes self sustainable. Through the incubation initiative, IILM aims to provide an environment where students and entrepreneurs feel that their experience with IILM is most productive and inspiring

Dr Smitha Girija, then welcomed Mr. Kapil Chanana – IILM’s first batch alummus (1994-96   batch). Mrs. Malvika Rai presented an award to Mr. Kapil Chanana. The honour was bestowed upon him for his outstanding accomplishments in his chosen field of endeavor thus bringing honor and prestige to his fellow Alumni and Alma Mater. Mr. Kapil Chanana is General Manager – Activation, Coca Cola India Private Ltd. Mr. Chanana then addressed the graduating students. In his address, he shared his challenges as an entrepreneur with the students and motivated them to work for their passions. He also encouraged the students that they should never lose their individuality due the challenges of the outside world. He said the education is important but what drives a person and his performance are his passions.

With us is IILM Alumni Mr Kapil Chanana from @CocaCola India to greet the Class of 2016, #ConvocationDay #IILMGrads pic.twitter.com/zf2APm2zbR

Dr. Jyotsna Suri then delivered her talk in which she motivated the students by saying that though it is very important to generate success and wealth but they must not forget the core values of humanity. She stressed that students should never deviate from honesty and integrity, respect for Individuals, responsible Communication, devotion to Duty in order to become successful individuals and should also Minimize Wastage to be called as responsible managers.

She then honored six faculty members of IILM for the “Excellence in Teaching” Award. The six faculty members who received this award are Prof Vinay Chirania – The best Teacher’s Award for Core module- at IGSM, Prof Ruchi Shah – IIBM and Dr. Shivani Khurana – IILM, LR. The best Teacher’s Award for Elective module- at IGSM was awarded to Prof Raju Majumdar,  Prof Shweta Sharma- at IIBM and Dr Preethi Srinivas at IILM, LR. 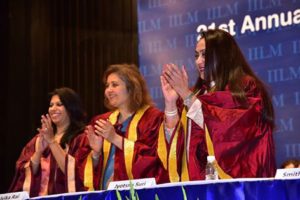 IILM Convocation 2016, Presided Over by Dr. Jyotsna Suri, Chairperson and Managing Director – The Lalit Suri Hospitality Group Ltd. She enlightened us all with her speech for our fellow graduates and professors of IILM from all three campuses.

“Malavika & Anil Rai ji,  IILM Board of Governors, faculty members, proud parents and the graduating students, I am privileged to be here for the 21st Convocation of IILM – thank you very much for inviting me.

IILM is one of the leading business schools in India offering undergraduate and postgraduate programmes in management.  I believe the focus is to develop students as globally aware members of society who are responsible business leaders. The initiative to encourage students from J&K and Northeast by offering them 25% scholarship and 10% scholarships to every women student is highly commendable. I am delighted to know that there are 71 girls out of 178 students graduating this year.

Young ladies & Gentlemen, In the depressed global economic scenario India stands out like a bright spot.  The Indian economy is growing at 7.6% and will continue to do so in the future.  Historically, India is one of the oldest cultures and Demographically it is the youngest nation about 60% are below the age of 30. India with its 29 states, 7 Union Territories and its burgeoning middle class has both the Demand and Supply and therefore its Economy will continue to grow. The services sector is doing fairly well. The Governement’s initiative of ‘Make in India’ is giving a boost to India’s sluggish manufacturing sector.  The Prime Minister’s clarion call of ‘Startup India’ / ‘Standup India’ is aimed at you and is providing a stable platform to young new entrepreneurs. As you graduate, there is huge opportunity waiting for you. Some you may join established or establishing firms, some may add value to existing family businesses and some may become entrepreneurs, who will not only sustain themselves, but also offer employment to others.

While it is very important to generate success and wealth we must not forget the core values of humanity. Let me give you fist full of values:-

Along with this strong fist are my good wishes to each one of you as you step out to establish yourself. Do your parents, your country and your planet proud.