INTRODUCTION
Bitcoin has been in news for a couple of years now.If you are fascinated by virtual reality or virtual gaming, you will be excited to know about virtual currency. What is virtual currency? Can one feel this currency? Where do you get this type currency? Let’s find out more about this novel technology by reading this article on Bitcoin & Litecoin: A Contentious Bid.

“Virtual currencies, perhaps most notably Bitcoin, have captured the imagination of some, struck fear among others, and confused the heck out of the rest of us.” – Thomas Carper, US-Senator

WHAT IS CRYPTOCURRENCY OR VIRTUAL CURRENCY?
In layman terms, cryptocurrency or virtual currency is digital or electronic currency that is revolutionizing the way people do transact. There are many different versions of cryptocurrency, but most experts would point at the Netherlands as the origin of cryptocurrency. Most cryptocurrencies in the world are not regulated by any national governments as they are considered to be as an alternative currency. Bitcoin was the first cryptocurrency that caught the imagination of thousands of people. Other Virtual /Crypto currencies are:
• Litecoin
• Dash
• Ripple
• Monero
• Ethereum
• Zcash

BITCOIN – HOW DOES IT WORK?
Bitcoin is a virtual currency, based on the peer-to-peer technology to operate with no central bank or governing authority. The network carries out all the maintenance of transactions and the issuing of bitcoins. Bitcoin is an open source technology and nobody either controls or owns it. All people who are interested can be a part of this kind of money. Bitcoins run on the blockchain technology, which is a decentralized ledger. This ledger is kept updated every time and held by all users of the network. If you want to create a bitcoins, you need to generate the blocks on this network. Each block is created cryptographically by using the computing and coding power of its users and then it appended to the blockchain. So users earn by keeping the network running all the time.

Bitcoin can be defined as “decentralized means of tracking and assigning wealth or economy, it is a software protocol”. It was invented by a group of programmers, or an unidentified programmer, under the name of Satoshi Nakamoto.It was introduced on October 31st, 2008 to a cryptography mailing list and thereafter released as open-source software in 2009.

Bitcoin is the largest in terms of total market value. Bitcoin uses two cryptographic keys, first is one public (username) and other is one private (password) are generated, no IP addresses, name, or phone number is recorded.

BITCOIN – WHO INVENTED & WHY?
Satoshi Nakamoto is an avid and cryptic internet user. He invented Bitcoin and introduced it to the world in 2009. Why did Satoshi Nakamoto invent this currency? This is million dollar question that still needs some clear answering from the maverick. One good reason of this can be the fact that people always want to transact without any hefty bank charges and the intervention of government. Thus, Bitcoin is seen as the best tool for anonymous and private transactions

“Bitcoin will become the new gold and re-align the playing field of central bankers and commercial bankers.”
– Jon Matonis, Vice-President at nChain 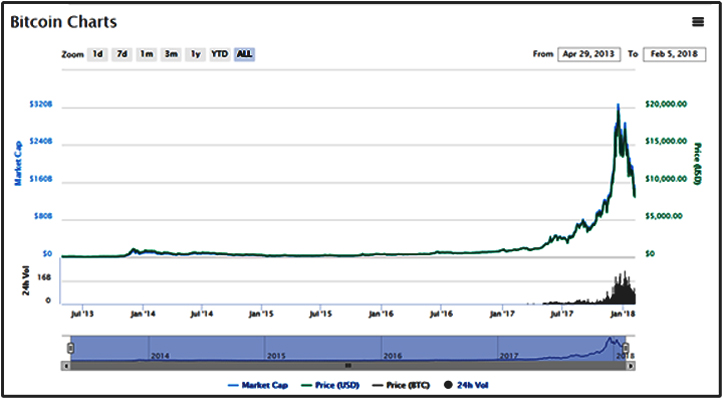 WHAT IS LITECOIN?
Litecoin is another Cryptocurrency or decentralised digital currency, similar to Bitcoin. This was created by Charlie Lee. The main difference between Bitcoin and Litecoin is that Litecoin has a more number of coins that can be created. It also has faster transaction rates. Litecoin’s algorithm allows for a total of 84 million Litecoins to be created. Bitcoin lags behind due to this algorithm as Litecoin’s capacity 4x larger than Bitcoin. This helps with 4 time’s faster transaction rate confirmation. Confirming transactions help create new coins via a process known as ‘Mining’.The inventor of Litecoin, Charlie Lee was a previous employee of Google. He also worked as an Ex-Director of Engineering with Coinbase. He calls himself @SatoshiLite on Twitter (Satoshi Nakamoto is the founder of Bitcoin!) 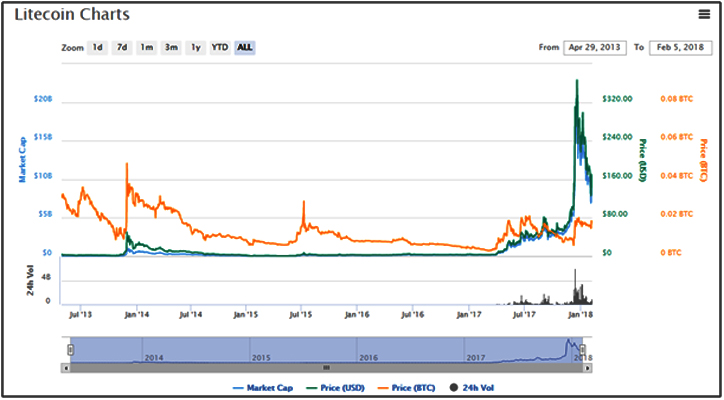 LATEST UPDATES ON BITCOIN & LITECOIN
• Bitcoin’s price skyrocketed from approximately $900 to close to $20,000 in the span of just 12 months
• The hackers of WannaCry Ransomeware had asked ransom as Bitcoin!
• In recent news, Litecoin has overtaken the fourth place in the Cryptocurrency business by beating IOTA & Ripple.
• The top three virtual currencies are Bitcoin, Ethereum & Bitcoin cash.
• Litecoin is stepping up its game with the market capitalisation of Rs 0.88 lakh crore recently.

RISKS INVOLVED IN BITCOIN
• It can be Hacked, phished, damaged by malware, password lost. In all case, money will be lost.
• Same with all other crypto-currency lite coin, bbq coins, dogecoin etc. Even in India Laxmicoin.com is founder by Mitts Daki (US) and Raj Dangi (Bangalore) and promises to give 30% of profit to NGO but RBI denied their proposal in 2013 as they stand “Examining the issues in Digital currency”.
• BuySellBitco.in is now Zebpay; this is India’s oldest exchange to buy and sell bitcoins. BuySellBitco.in is serving Indian bitcoiners since 2013.Consumer courts cannot help them as these bodies follow fiat currency.
• Mere digital code, no intrinsic value, not backed by Gold Silver or crude oil.
• Reserve Bank of India and People Bank of China denied it as legal tender.
• As we Indians have Income Tax Department, USA has IRS (Internal Revenue Service), IRS stand for Bitcoin.
• Bitcoin exchange in India; founded by Mahim Gupta from Bhopal. It was closed by RBI in 2013. They provide around Rs 14,400 for 1 Bitcoin and sell 1 Bitcoin for around Rs 14,800.

CONCLUSION
Bitcoin disciples argue its price will raise further, viewing volatility as a necessary bump on the path to even higher valuations. Fans even coined a term to describe their tactic of holding on for dear life – Hodl.
There are some rational reasons to keep calm and carrying on hodling. Serious investors are just getting interested in a market that has so far been dominated by crypto nerds and retail investors. The Chicago Mercantile Exchange (CME) is introducing Bitcoin derivatives – a form of bet on the future value of the currency – which will let hedge funds into the market before Christmas.(Source:http://www.cmegroup.com/media-room/press-releases/2017/12/01/cme_group_self-certifiesbitcoinfuturestolaunchdec18.html).
The absence of government intervention or bank standing behind the currency also fuels its appeal to those unhappy with the financial system after the credit crunch.Bubbles are driven by investor’s sentiment and stories, and bitcoins has a great story with a lot of mystery involved and spectacle to it.