The second edition of “Words in the Garden” co hosted by IILM Institute was held on 24 th and 25 th February, 2018, at India International Centre, New Delhi. The festival, based on the theme “Ghalib ki Dilli“, was organized to commemorate the 220th birth anniversary of the poet, Mirza Ghalib. The two day festival was a convergence of some of the most brilliant and inspiring artists in the fields of literature, art, social sciences and public spheres. The session names were interestingly borrowed from famous words of the poet. The inaugural session called “Zahraab Ugata Hai Mujhe” was a discussion featuring poet, Shri Shamsur Rahman Faruq; poet, Shri Ashok Vajpeyi ji ; author, Pavan K Varma and Mrs. Malvika Rai. This was followed by a delicious dinner representative of 19 th century Delhi cuisine curated by Salma Yusuf Hussain, a food curator. The festival began with the screening of the movie “Mirza Ghalib (1954)” depicting the life and times of of the poet. It told the story of Mirza Ghalib’s tragic, ill-fated love for a beautiful courtesan, Chaudvin and his triumphs and failures ultimately resulting in his descent from a wealthy poet and nobleman to a life of poverty and penury. The next highlight was a play named “Ghalib ki New Delhi”, a satire on society exhibited through a series of interesting difficulties that Ghalib would have faced had he been born in the present era. Thereafter, Mr. Bishwajit Bhattacharrya with his group of musicians took the audience on a musical journey through time with old Bollywood songs that correlated with the themes of Ghalib’s poetry: Shahar-e-Aarzoo; Tamasha Mere Aagey; Ajab Waqt and Gham-e-Hasti. All the programmes were well received by the audience. 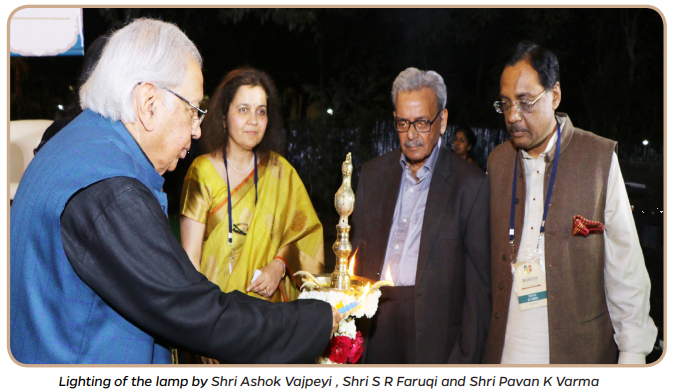 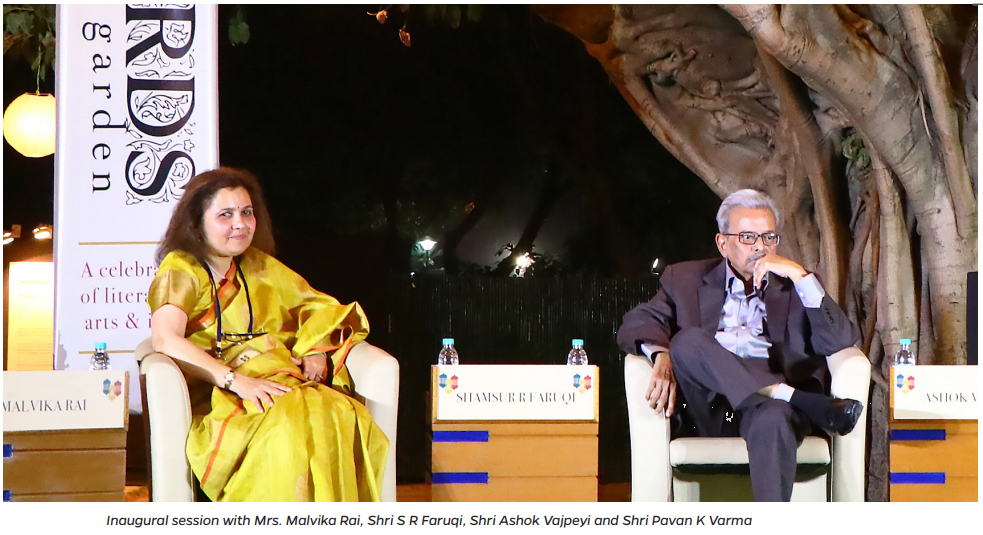 The next day brought a series of workshops on Calligraphy and Photography. Naqsh-e-Ghalib was a workshop where a renowned Delhi-based calligraphy artist, Ms Shipra Dutta, 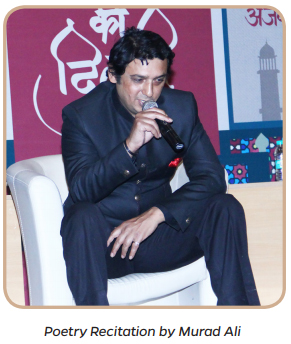 demonstrated and taught the participants some nuances of this art from. The photography workshop by Ms Shoba Jolly that revolved around travel, landscape, street and fine art photography, discussed some classic rules of great photography. These vibrant and interactive sessions had participants actively participating in discussions and learning new and unique techniques of both the art forms. This was followed by a piano recital by Sahil Vasudeva, a young and talented young classical musician who is credited with bringing the piano out of conventional spaces into the arena of performance art. 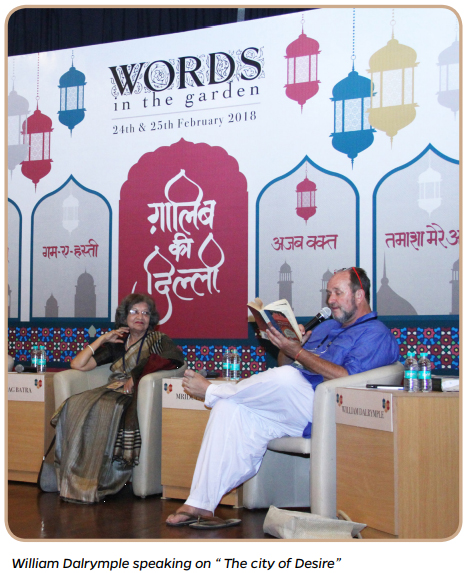 Mehfil-e-Shayari had the audience spell bound with the soulful recitation of Mirza Ghalib’s poetry with English translations by Murad Ali, the mesmerizing timbre of sarangi proving completely captivating William Dalrymple, Mridula Garg, Anurag Batra and Vikram Lall discussed the interpretation and definition of Ghalib’s concept of Delhi “Shahar-e-Aarzoo” or “The City of Desire” in the current times. Their interesting points of views meandered and wove around the fact that despite Delhi having changed over the years, it has managed to retain its basic essence justifying it still being labelled “The City of Desire“. The session “Gham-e-Hasti” had Om Thanvi, editor of the prestigious Hindi daily in conversation with Adhik Kadam, cofounder of an NGO working in Kashmir’s hostile environment during the course of which they shared the pain of common people, a poignant reminder of the pathetic living conditions at the grass root levels. In “Aakhir is dard kee dawa kya hai” 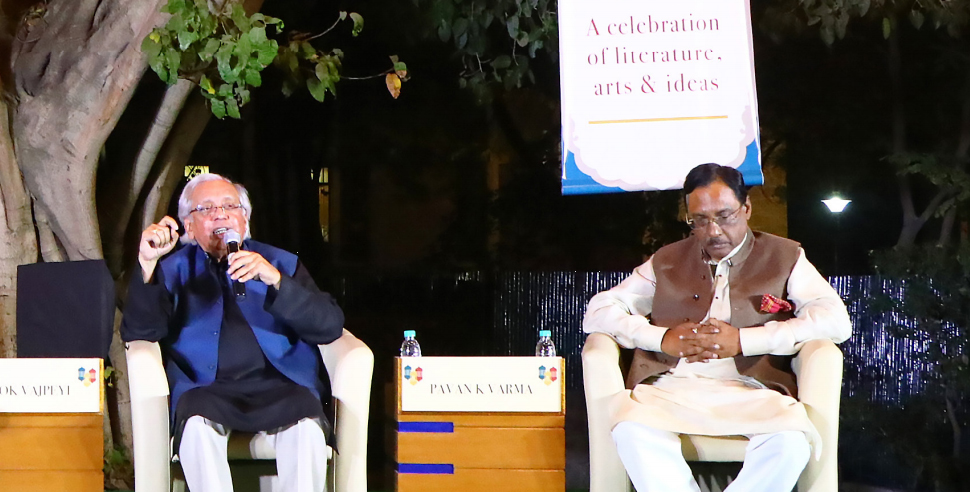 Mr. Adhik Kadam spoke about his social work in many remote areas of Jammu and Kashmir highlighting the role of his NGO “Borderless World Foundation” towards welfare activities. At the end of this well attended session, Mr Kadam was flooded with questions that he answered drawing in the audience into discussions. The next session was appropriately called “Sukhan Gustaraana Baat” from Ghalib’s verse “maqt-e mein aa pari hai sukhan gustaraana baat” which translates to “I wrote something in the ‘sher which became popular“. During this event Vaishali Mathur gave a glimpse into the world of publishing, and discussed the intricacies of decision making involved in identifying writing styles. The last event was “Ghalib Baithak” where Team Parwaz, in a scintillating evening, traversed through Ghalib’s life, times and his poetry giving the audience a peek into the poet’s personality by interspersing the session with anecdotes about the poet’s wit and humour. “Mehfil-e-Ghalib” with Radhika Chopra singing Mirza Ghalib’s ghazals in her crisp and clear voice with an impeccable Hindi and Urdu dictation was a fitting grand finale for the festival. 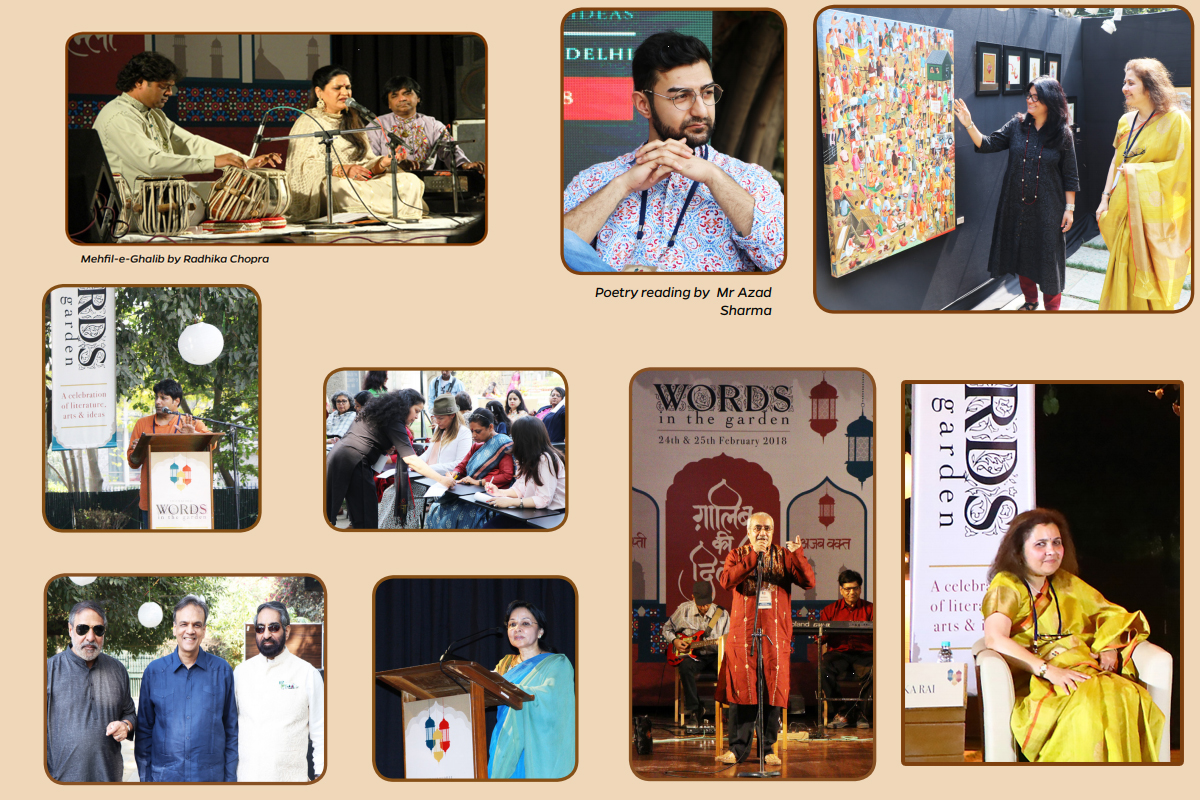 The Second edition of “Words in the Garden” was an endeavor to defuse literature along with art and ideas. The event proved that art and literature have no geographical boundaries and all walls crumble where art, music and literature are concerned. It was a unique opportunity for the audience to witness and take part in stimulating discussions, invigorating sessions, meet their favorite authors, poets, musicians and influencers. With this the next edition of our festival “Bapuji ki Dilli” was also announced. 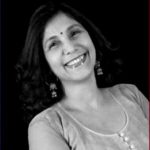