NHRD Network has conducted a session on “Best Employer practice sharing driving performance excellence where around 56 members joined in. The students and faculty members attended the session and were benefited by the learning from the corporate leaders.

The eminent speakers for the session

The Delhi Chapter of NHRD Network was the organizing committee for the session. The session began with lot of enthusiasm where students and faculty members also joined in to listen to the speakers. 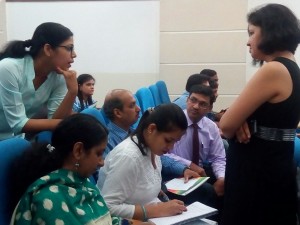 Fraternity at the Event involved in the session activity 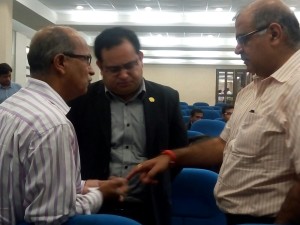 Mr Marc addressed the audience where he discussed how to predict and understand potential. He mentioned that potential is the ability to move farther and faster in the organization. He asked the audience to get into groups of 3-4 and discuss three things that best predict potential in their opinion. After the exercise audience came up with their predictions about potential which included ambition, eagerness, attitude, adaptation to new things etc and discussed about the fact that 93% of higher potential people are also higher performers. High performers produce up-to 3-12 times the result of average performer. The market hence knows them therefore it is important for the organization to know people with high potential so that they don’t loose them. He also mentioned that such people are an asset to the organization and hence should be taken care of. So he concluded that as HR leaders it is vital to make sure that high performers are identified and retained in the organization.

HIGH POTENTIAL IS BY BIRTH OR MADE??

Talking about science high potential is contribution of both intelligence and personality. Intelligence contribute 30% personality contribute 55% and contribution of both make 45% of higher potential people. The majority 55% is about fit. Science says when people ”fit” with the environment they are more engaged and have higher performance therefore best fit predicts potential. The discussion took a turn putting the CEOs in the the lime light highlighting the fact that marked differentiation between efficiency and innovation. The key factors that were highlighted were facts like:

The success model states that the focus should not be limited to just their competencies since capabilities can shine in a whole new light.

The three thriving questions according to Mark to assess the high potential employees were:

Hereby with the dos and dont’s Marc concluded the entire session on the note that high potential works hand in hand with efficiency, whereas any employers work primarily be attracted to employ youth with both tact and grit that would give the employer the certainty that the employee is capable to take the organization to a level higher than it originally is.

The session was presented a huge learning opportunity to the students and the academia and corporate fraternity.