On June 23, 2016, in one of the most epochal referendums in European history if not modern history, Britain the 5th largest economy in the world voted to quit the European Union (EU) by a margin of around 1.3 million votes, defying predictions from all economic, political & academic quarters. The impact of Britain’s Exit from the EU is already being felt by financial markets across the EU and the globe.

Brexit- A snapshot:
‘Brexit’ is a combination of the words “ British” and “Exit” and referred ( when it was coined- by the Economist magazine in June 2012- “ A Brixit Looms”- http://www.economist.com/blogs/bagehot/2012/06/britain-and-eu-0 ) to the departure of Britain from the EU. The origins of the EU dates back to 1957 as a six nation economic and political alliance. Britain joined the alliance only in 1973 but has faced a lot of opposition and skepticism against its continuation within the EU ever since. In 1975, in the first referendum on the same issue (whether Britain should continue with EU), 67% of those who voted preferred to ‘Remain’. Meanwhile, EU has today grown into a “gigantic transnational entity of 28 countries, with most countries moving into a common currency ‘Euro’. However, Britain still uses pound as its currency and does not participate in the Schengen border-free zone, which allows passport- free travel within the EU.
Why Brexit?
As part of his 2015 re-election campaign, British Prime Minister David Cameron had promised to hold a referendum on Brexit. Many from the ruling Conservative Party and the U.K. Independence Party believe that the EU infringes on British sovereignty and its national interests on issues such as trade, immigration, financial and labor regulation, social spending and a host of related issues .
•According to Brexit supporters, increased migration from other European countries into UK using the ‘freedom of movement clause’ has put a heavy burden on natural resources and increased welfare expenditure. The ‘Remain’ supporters argue to the contrary saying that the addition to the national economy from the migrants is more than they take out.

•45% of UK trade is with the EU, therefore, the ‘Remain’ side says, access to the single European market, free of tariffs and border controls, is critical for the U.K. However, the Brexit supporters are confident that since the the EU needs British markets, individual trade deals with European countries can be easily negotiated.

•While Brexit supporters claim that there will be a jobs boom without the restrictions that EU regulations impose, the opposers argue that as three million jobs in the UK are tied to the EU there could be a jobs crisis if the U.K. leaves the EU.

•One side is of the opinion that cooperating with the EU will make the UK safer, while the other side believes that the security risk will in fact increase if the U.K. does not have control over its borders.

•Another argument in support of the Remain campaign was that leaving the EU will jeopardize the dominance of London, the Europe’s financial centre, as banks will move out. Whereas, the Brexiteers argue that London’s status is unassailable as it is already a global power base!

Possible Impact of Brexit on UK and EU:

A major impact could be on UK laws ( a 2010 study attributes 17% of UK laws to its EU membership), especially relating to fishing, agriculture, trade and environmental policies, criminal justice, data protection, immigration and broadcasting, and human rights . For example, in agriculture British farmers would be deprived of EU subsidies. “British farmers have to meet the EU standards of quality control to export to member countries. EU’s agriculture policy lays down the law on GM crops, animal husbandry and even how much of his field a farmer must leave fallow to get subsidies” . With Brexit, it remains to be seen how Britain negotiates with EU on these issues on a case- by- case basis. On the economy front, it has been pointed out that since prices in the EU are 20% higher than global market prices, exiting the EU will enable Britain to reduce prices by 8% . The political fallouts of Brexit are yet to take shape, the only major indication so far being the declaration of David Cameron that he will step down as the Prime Minister with effect from October this year.
UK is one of the largest contributors to the EU’s monetary resources spent on administration of the EU in member countries, aid activities outside the EU, grants for asylum, education and culture, on preserving and managing natural resources (this includes, agriculture, fishing, mining and so on), helping poorer countries in Europe and in grants to research in science and technology and in helping small businesses. The Brexit, it’s strongly believed, would rock the EU — already shaken by differences over migration and the future of the eurozone — by ripping away its second-largest economy, one of its top two military powers and by far its richest financial centre. Moreover, as Dr. Jonathan Portes of the National Institute of Economic and Social Research points out, “ If Brexit wins we can account on a lot more referendums” !!
Possible Impact on India
India’s concerns over Brexit are multi-dimensional. Listed below are some of them.
•The welfare of a nearly 3 million strong diaspora of Indian-origin UK citizens.

•The interests of a large moving population of Indians who come to Britain ever year as tourists, business people, professionals, students, spouses, parents and relatives.

•Many Indian companies (around 800 companies- more than the combined number in Europe) are listed on the London Stock Exchange and many have European headquarters in London- Brexit could reduce the advantage.
•“Brexit can affect India’s flagship IT sector given that the UK accounts for 17% or one-sixth of the sector’s global exports that topped $100 billion (approximately Rs.6.70 lakh crore). For one, Brexit will increase overhead costs, setting up new headquarters, perhaps in both Europe and Britain” .

It may be noted that there is a tone of optimism in Indian circles as evidenced by statements by industry heads, policy practitioners including the RBI Governor and the Union Finance Minister.
The rise in uncertainty brings both risks and opportunities for India. “Brexit is neither good nor bad for India. It’s mostly how the country responds to the new situation” 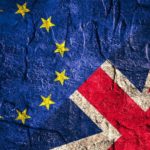 Announced and confirmed, it is Brexit. The referendum declares Britain’s exit from the 20 member European Union. It will certainly ripple the global economy and markets, may be in just a blink of an eye. But the question now lingers, will Brexit impact India? If yes, will be on the negative grounds, or positive? In an article END_OF_DOCUMENT_TOKEN_TO_BE_REPLACED