“East is East and West is West, And the Twain shall never meet.” This was what Rudyard Kipling had once said to highlight the difference between cultures and how they could never actually mix. The melting pot, that is IILM, runs contrary to what Kipling had said. In the world of IILM, one can see the seamless mixture of students from all over India. There are students from as far as Tamil Nadu in the South, Assam from the North East, the far reaches of Rajasthan, and the depths of Himachal.
Life at IILM is all about celebrating the customs of other cultures. Students participate with undiminished enthusiasm no matter what the festival – Onam or Baisakhi. The campus is abuzz with activity whenever a festival takes place. The capacity utilization of the auditorium is always high. There is a constant clamour to celebrate and share. The mess conjures up recipes of a distant land and the students revel in party and fun.
A typical class in IILM can be daunting at times because of the multitude of accents that descend on the unsuspecting mind. The southern drawl is interspersed with the distinct Bengali lisp. The ubiquitous Bhojpuri and the North Indian pun. However, in the midst of all this, it emerges a language so clear that a student never lacks clarity or flair. Even the teachers at IILM are a mixed lot. They are drawn from the vast reservoir of India. The Statistics class is the domain of “Majumdar sir” – where complex numbers get converted into simple solutions. The Economics class is the sole preserve of “Nair sir” – where the propensity to teach is anything but marginal. The Accountancy class is dominated by “Prof. Malarizvi” madam whose penchant for perfection leaves students in a daze. Walking down the corridor of the IILM classrooms can thus, be quite an education – different subjects and distinct personalities in charge of them.

The infrastructure of IILM GSM also breeds the unison for culture. The large green lush landscaped campus which runs over 27 plus provides students after class hours to play, mind storm, and debate on various contextual topics. Its a home away from home, kind of living in a prime suburban neighbourhood that one can dream of –amidst open spaces that encompass lawns, gardens and a driveway. The cafeteria at IILM is a big potpourri. The smattering of English or the whisper of Telugu – and many such wafts of conversation float lightly in the air. The food is quite eclectic too. It can be standard North Indian fare but equally South Indian as well. The different accents, expectations, and experiences converge into a larger whole. It is like the painting of a masterpiece. Different colours, hues and fragrances get mixed but come out as one. Truly – the world of IILM, is nothing but a masterpiece. A painting that has been made with love and care ….that seeks the world with glee. 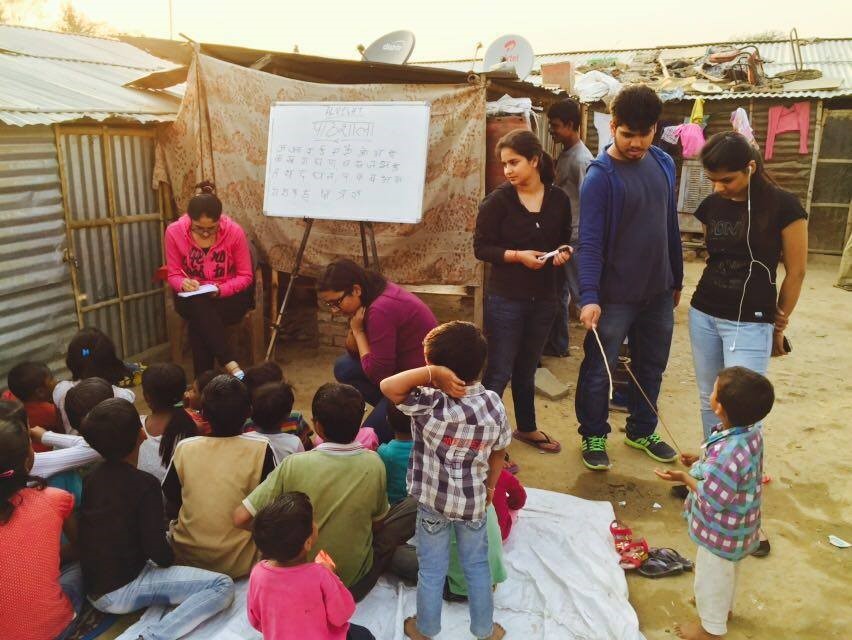 Yuva Goonj established on Feb 2016 under the guidance of Dr.Pinky Goswami, has taken an initiative to educate the underprivileged children.
“Paathshala” an initiative by “Yuvagoonj.

We at Yuvagoonj are conscious of the importance of continual learning,so we organise daily classes in the slum in Sector 53, Gurgaon.

The 30 children between the ages of 3 to 12 are segregated into classes of two as per age groups and further subdivided into smaller groups as per their learning patterns to ensure focussed attention by the teachers. The coordinators of the Pathshala team are Radhika Bansal, Shreya Mukherjee, Shreya Gupta, Himanshu, Saloni and many more.

The students are introduced to technology as teachers use visual and audio aids to enable better learning. We also understand the importance of entertainment so sports and other fun activities are also incorporated into their curriculum.

We are also trying our best for the admission of those underprivileged children in the nearby Govt. School so that they are not deprived from their right to education.