“The media is the most powerful entity on earth. They have the power to make the innocent guilty and to make the guilty innocent, and that’s power. Because they control the minds of the masses” ~ Malcolm X.

Media has been ruling since time immemorial. Mass media refers to various platforms, which can be used to communicate and interact with a large number of audiences in different languages. The frontrunners being print and digital.

Print media is known from the days of Julius Cesar when Acta Diurna, came into being.It has been dominating the media and communication industry with newspapers, magazines, booklets and brochures, house magazines, periodicals or newsletters, direct mailers, handbills or flyers, billboards, press releases, and books. However, change is the only constant and with digital slowly building up a solid userbase over the years a question mark on the sustainability of print arose.

We all know that digital media is created, modified and distributed on digital electronic devices. For many of us, it may be difficult to believe, but in 1986, only 34 years back, we had as little as 1 percent of total media storage capacity in digital form.  This number rose to 94 percent in 2007, which best illustrates the speed at which digitalization came about. In a relatively short period, the Internet has had a remarkable influence on almost every facet of our lives. This evolution of media and communication has not just evolved more with each passing day but has also revolutionized the way individuals and businesses operate.

The debate and trends

The biggest advantage that print has over digital is its credibility. Print media is more trustworthy because once the news is published, it cannot be deleted or even modified. For most of us, the day begins and ends with screens. The print is a soft breeze that comes by to give us a digital detox time. When we read newspapers, there are no distractions from numerous clickable advertisements and pop-ups, that makes the consumption and comprehension of the news more deep-down.

In a country like ours, many areas have limited or no access to the internet. For them, print media is a blessing in disguise. However, when the debate continues to the statistics of literacy rate, digital scores a point, since radio and television do not require literacy and readability skills.

Current trends show that most newspapers and magazines are turning to their digital version and several online news websites are bringing their print versions. This is quite a mix bag of ways to reach more consumers and to establish credibility. However, in this fast-paced world and extreme paucity of time a  two-way communication that digital media offers make news and information interactive, engaging, and interesting. With a faster turnaround time and instant updates digital keeps us more streamlined.  This makes it easy to spread important news among the public.

However, as anyone can easily generate content for digital media, fake news is on the rise. As a result, unless they are famous and have a good name, digital media platforms are not being trusted by the public. In this regard, print media win hands down. 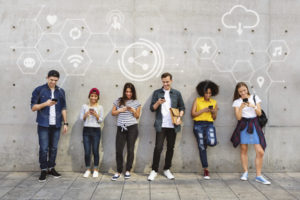 Yes! News is now being consumed in little digital packets. While digital boasts of a solid userbase today, print media has also witnessed healthy growth in terms of readership. Both have their pros and cons and will see robust growth in the coming years with their respective consumers. In fact, with increasing literacy rates, print is acquiring more users. The print is not losing its sheen, but it will have to diversify, experiment and explore more opportunities to remain in the rat race. So, we can say that print and digital media are co-existing quite happily for now. It’s for undercurrents to decide who sustains in the long run.

We at IILM University understand the current trends, we know this is one of the most dynamic and imposing industry and therefore, the 3-year bachelor’s degree in journalism, media and communication offers the most intensive and innovative curriculum blended with a progressive pedagogy. From a range of core and electives, the student learns all about various media and communication platforms such a print, digital, broadcast, advertising, public relations, corporate communication, photography and many more. We teach journalism, media, communication not only as an industry but as part of society as well.

The advent of digital media has been nothing short of a revolution for our country. In recent times this importance got highlighted during demonetization and now with the Corona crisis staring at our face. This has also vastly affected our social relationships and the way we perceive issues.

Every technology has its drawbacks when used to generate negativism and disorder. Unfortunately these are the perils of our times and in spite of existing safeguards there are implications which have ominous consequences. Though, we have embraced the digital world with open arms, however, it cannot be said for the common man.

It needs no emphasis that more than 70 percent of the population our country resides in the rural areas. Has this population changed its ways and thoughts to imbibe the rudiments of digitization? The answer would not please us. We are still a developing country and cannot measure up to the standards of countries such as USA, Japan or France.

What then should be the way out? The first and the foremost are related to the reach of media. We need to have internet connectivity to the remotest areas which may involve a large amount of expenditure. A way out could be to develop a cyber hub in each village which should be maintained by the district administration and people could flock there and use the mobiles with the available internet connectivity to transact any kind of business or information related activity. It is noteworthy to see that PayTM and such like platforms have been a great force multiplier towards paperless transaction. We need to build up on these existing platforms and extend their reach to the remote areas of the country.

Broadband highways need to come up and get established in a phased manner. The common man needs this technology to augment the agricultural base of the country and build up the resources of our country. The path is long but can be tread upon if the correct impetus is there. I am reminded of a famous quote,

”Being challenged in life is inevitable, being defeated is optional”.