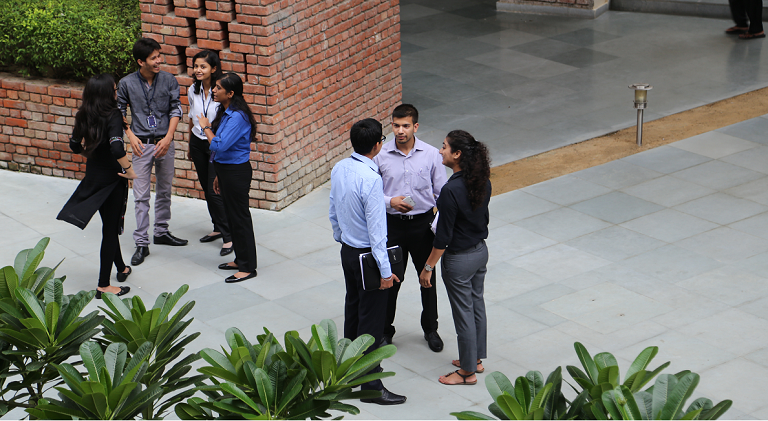 Education has for long been acknowledged as a pillar to support and enhance sustainable development. On Day 2 of the PRME Conference at IILM, one of the top MBA colleges in India, education and its role in pursuing SDGs (Sustainable Development Goals) took center-stage in the first session of the day. During the session on Laying The Foundation: Alignment Of Management Education With Sustainability, the support of education was discussed and evaluated by the esteemed panel of speakers who shared their insights with respect to the institutions and organisations they represented. The session was moderated by Dr. Shuchi Agarwal.

Moderation of consumption with education:

Mr. Manoj Sinha, principal of Aryabhatta College, University of Delhi, brought to light principles by Mahatma Gandhi that was extremely relevant in today’s world struggling with sustainable practices. Quoting the Mahatma’s famous saying ‘there is enough on Earth for everybody’s need, but not enough for everybody’s greed’, Mr. Sinha emphasized on moderation of consumption to ensure sustainability. He also brought forward the importance of education and its accessibility that could raise awareness on efficient applications to reduce consumption and support sustainable development.

The next speaker on the dais was Mr. John Verghese, Principal of St. Stephen’s College, the University of Delhi, who supported Mr. Sinha’s views on education and its accessibility. He further elaborated on the empowerment that comes with education, saying his point by citing the example of a hungry soul who would be in better control of the future when taught how to fish to feed self, rather than being provided with fish to feed self. A sound, well-informed education not only enables one to think of the best ways to respond to a situation but also how to execute the same, keeping in mind all socio-economic-political conditions.

How blockchain can change the game:

Mr. Siddharth Sibal, VP, Accenture, brought in his rich corporate experience to introduce how innovation is the key to sustainable development. He shared valuable insights from his travels and knowledge and encapsulated with how countries such as Russia, Costa Rica, China, are tackling development with improved digital technology. Mr. Sibal also addressed the exploding popularity of blockchain technology, and how it was becoming the base for decentralization. “The applications of blockchain in each and every field they can be implemented to can yield fantastic results for sustainable practices,” he said. He exemplified his point with SolarCoin, a direct application of the technology as the form of cryptocurrency developed to support global solar electricity generation. The peer-to-peer controlled system has been effective in distributing energy from ones who are producing excess energy with solar panels, to those who need more energy.

The speaker session concluded with a Q&A session where the enthusiastic attendees interacted with the speakers on their own possible roles in sustainable development. On being asked what kind of managers from MBA colleges can lead the movement for sustainability, Mr. Sibal replied, “The ones who think out of the box and have the passion to create. Only those with a hunger to create can innovate ethically and responsibly. And nothing less is the need of the hour for sustainable development.”